Yet another spool holder for the Flux Delta

This just in. I have published my attempt at a spool holder for larger filament spools that won’t fit under the hood. It came out well enough to satisfy my requirements and I felt others may find it useful.

Looks good! I downloaded it. Will see about printing it this week.

Thanks. If you have questions or want assistance, let me know. Any feedback you want to offer, I’m open, especially to critical feedback. One can easily accept kudos, but I prefer the “this needs to be corrected” type as well.

I’ve found that the feed tube for the Flux Delta wants to “wander about” when connected to the external spool. There is insufficient height to the clip to drill a guide hole for the feed tube. One could increase the wall thickness and subtract a cylinder for the guide tube if desired.

I routed the feed tube over the clip and stuck it in place with push-pins. Adhesive tape didn’t stick well enough. 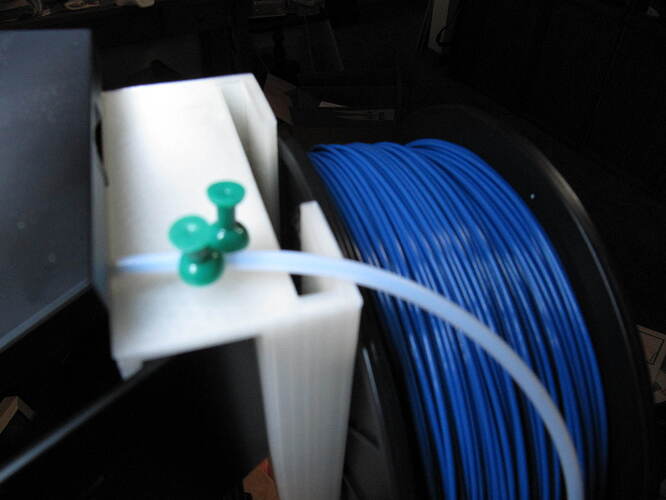 This is very nice, have you thought of also having the tube printed as well? This would be a solid no extra hardware needed type of spool holder. Very very awesome design/idea.

I have insufficient experience with 3d printed objects to determine appropriate strength of a column printed vertically, hence the aluminum tube insert. Printing the column horizontally would be stronger, but would require supports and may distort the column, although that’s not a big deal, I think.

When I derive a need (of sorts), my thought processes tend to run in the first direction open for escape. If it leads to a dead end, those processes collapse and re-initialize in a different direction. This project started out somewhat simpler, in the manner you describe, but was complicated by the need for clearance of the latch inside the cover and the need for clearance of the carriage for the rods. The various ways of resolving those concerns became too complex for my alleged mind and I dropped back to the pieces/parts method.

It’s clunky, perhaps, but it works for now. If I find it isn’t going well, I’ll consider a re-design, hoping that I’ve gained some knowledge in the process.

I would not be at all displeased to learn that someone else has taken the OpenSCAD file and modified it for his purposes. I’d hope that I would be informed of this and would be able to learn even more.

I new to the 3D print world but I would like to create something like this on top of the FLUX ( http://www.thingiverse.com/thing:676035 ) instead of on the side of it clipped. The idea is to have it feed in that angle above the feeder which would avoid problems with tube moving around too much. Can someone create something that fits the FLUX Top for that creation?

Have you seen this post:
Delta design by Jim (and more)
that presents an image, with the Flux logo, no less, from that master design artist Jimustanguitar. From his graphic, it appears to be a three or five piece construction, but it also appears that one could build it in a single print. He’s promised to continue his development on the design, along with all the other projects he’s making, otherwise I’d take a shot at it. I think Jim’s would be far more artistic as well as technically capable.

Here is my take on the external spool holder. It actually works surprisingly well. The full setup looks like this: 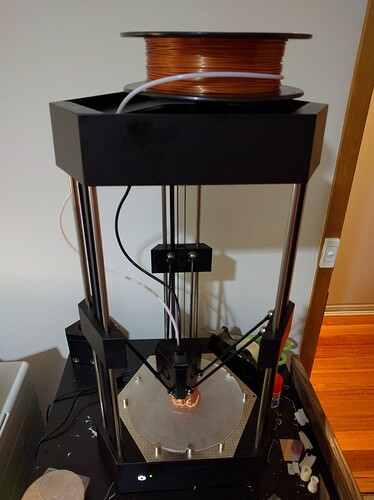 The print bed is a Fleks 3D 8 inch Delta bed held in place with magnets.

And here is Yoda as he came off the run: 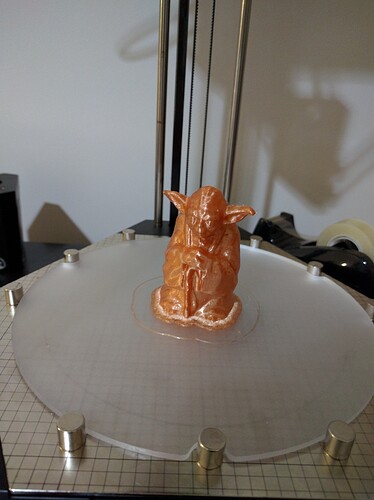 This is how the spool is loaded. I just use a simple Dremil felt pad as an oiler. 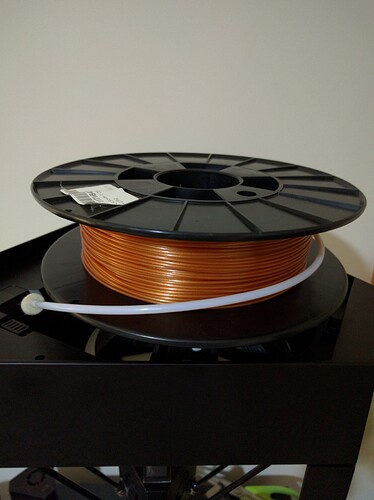 Under the hood, here are the parts: 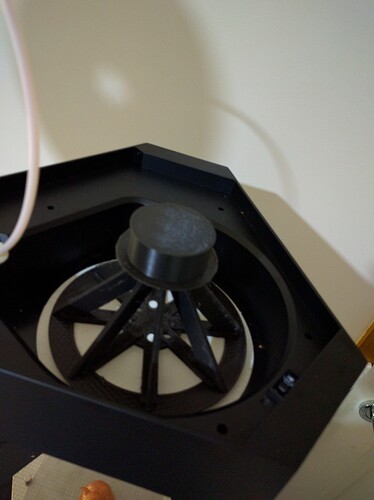 It is basically my already published ball bearing, which removes vertical friction: 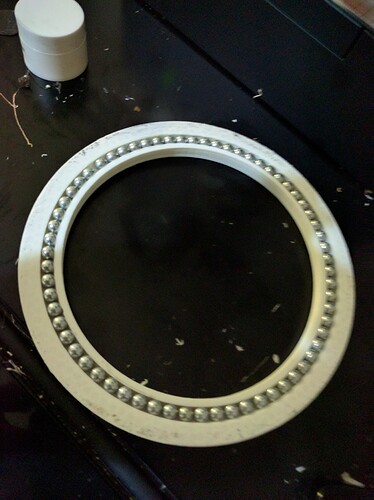 Into that, I insert another printed ball bearing that reduces horizontal friction: 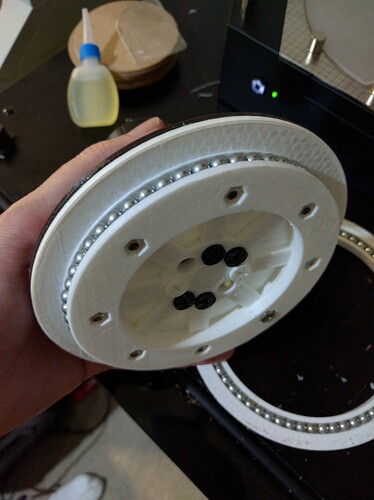 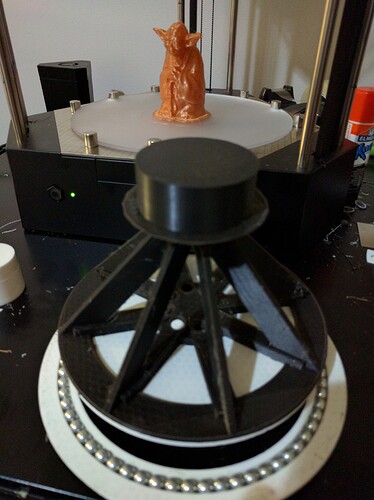 The spool diameter is of course a removable piece: 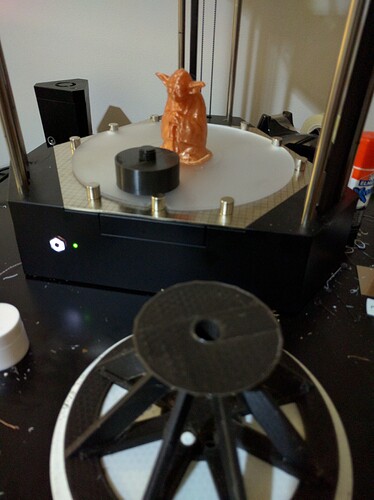 I’ve had fantastic results with this. Probably some of the best prints yet came from this setup. Yoda was printed in just over one hour with no “dings”, “warps” or adhesion errors.

The force is strong with this one…smart he is.

@ BjarneMatzen very nice construction.
Is there a chance that you can share the files for that?

dang , that is one nice setup , you would not want to sell a setup like that would you . or the files would work also if i can find the time to make one . thanks for showing .

So I’ve noticed some people place the 2nd feed tube on the unit and others don’t. What is the benefit of the second feed tube that is before the injector gears? Does it just help in controlling the filament on longer feed runs?

Putting the 2nd filament tube before the feeder helps with friction caused from the spool. It helps reduce the chance of clicking noise and makes the filament extruding more smooth.

I’m also interested in your external spool holder files, because I will need to use one for bigger spools, and yours looks very smooth.

Always happy to share. All the files are now here:

This is an external spool holder for the Flux 3D Delta printer. In addition to the printable parts it also requires 8 countersunk M5 x 12mm nuts and bolts and about 130 1/4 inch slingshot pellets. Sorry about the nuts and bolts. I was learning...

If anyone needs help with any of the details, just let me know. So far it works really well for me. Am about to load a completely full 1Kg spool to see if I need to do anything about filament drop. Will post updates if that turns out to be the case.

Thanks for sharing. I will have a look this weekend

I created another spool holder for the flux. If somebody is interested, its on thingiverse

Adapted Version of the Universal Standalone Spoolholder for the Flux 3D Delta Printer You will need to print the bearing wheels 6 times. Printable only with supports. For a better removal, make a space of 2 layers between the holder and the... 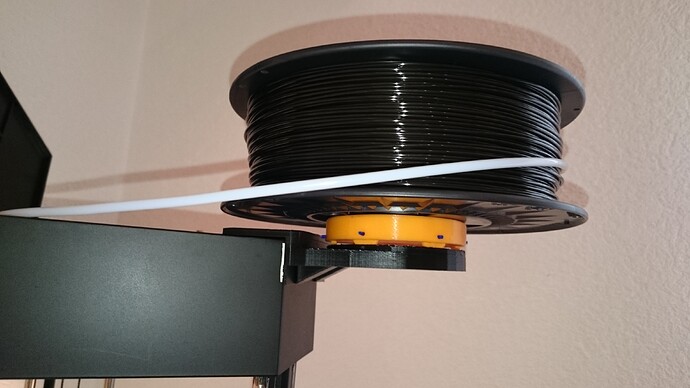 This is awesome! I think I’m going to try it. Ideally, I’d want to flip it around so the spool is inside the Flux area.

Is it possible to combine all the parts into 1 file (or fewer files), including the multiples of wheels, etc?

Flipping inside will not gonna work, its to wide for this. Also a problem of having the spool inside the machine is, that you have to make an angle for the filament feeder. The spool will be to close for a direct feed. I tried this already with the another spool holder i made

You mean for printing all at once? For this, the holder piece is to big i guess… maybe the rest i can put into one file, if that will help you?