The Trophy Room: Show us your best prints!

Well, it’s not quite as classy as Matfinks print, but does this count?

Note how I decided to get creative after neglecting to see if I actually had enough white filament to finish the print! 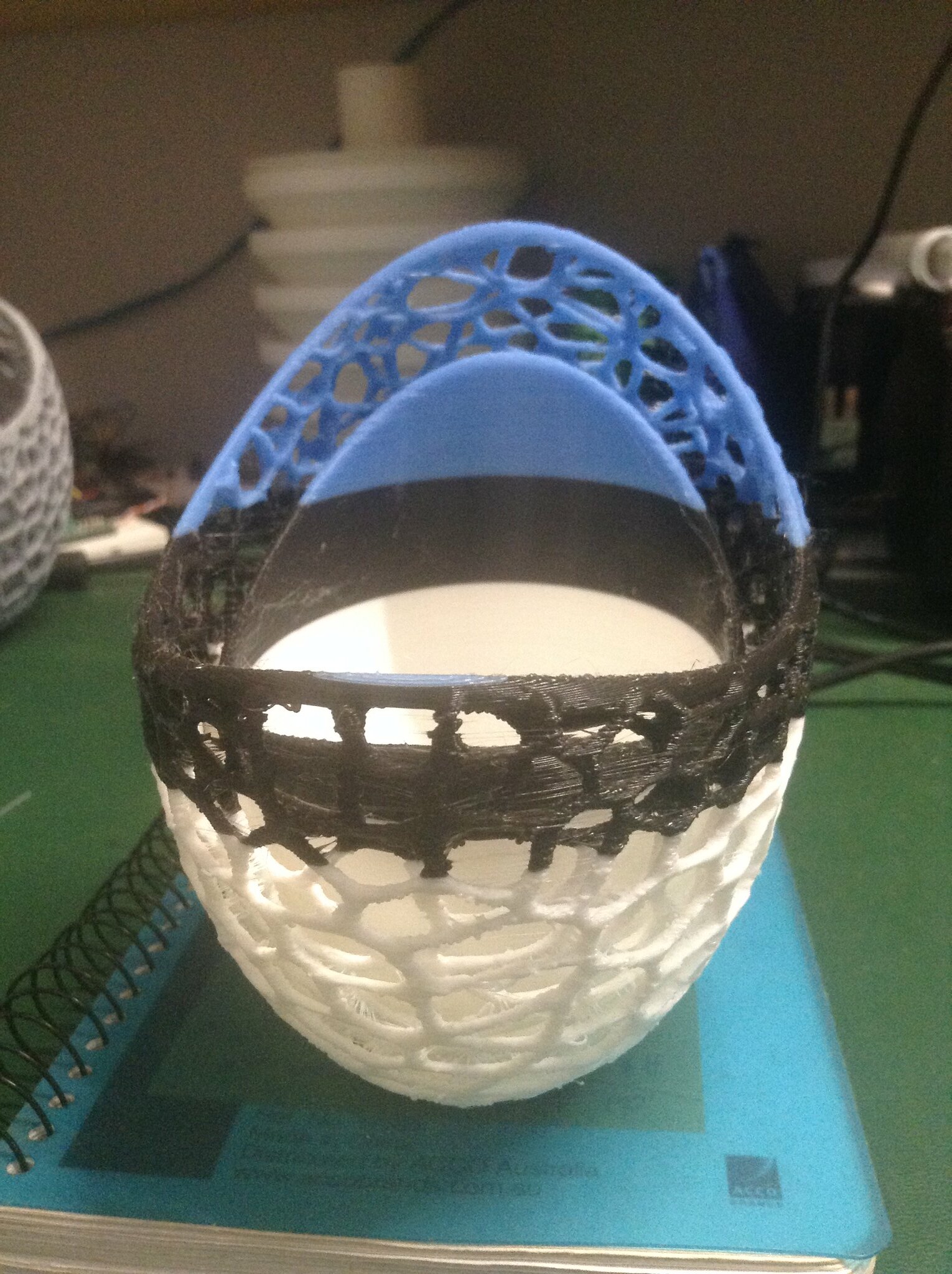 the rocket was printed on high quality settings and the gears on low. any recommendations ? you really need a better camera!

@aw1 Please feel free to post anytime, no need for the topic to remain silent. As far as the rocket on HQ settings, it looks like you’re getting some ooze on the curves. I’m just guessing you printed that upright. FLUX Delta does tend to artifact a little like that on curves, but you can dial in your temperature and speed settings and then play with retraction settings and clean that up quite a bit. For practice I’d download a small ‘torture test’ or cone test model from thingiverse to dial in settings for that filament.

Your gears on low settings look fine, that snap together joint looks like it worked well. On parts like that, I’ve found just a tiny bit of lithium grease helps keep things moving smooth and prevents the PLA from binding against itself. How have you printed that two colored star wars logo?

That’s actually after printing and turned 90 degrees upright. It is printed flat on it’s back.

The dual color effect is easy, using the ‘Pause at Layer’ command in Expert settings. Just use Preview to figure out where you want to change colors and tell it to pause there, switch filaments, and click resume. It works great except FLUX Studio now cools the print head which kind of sucks. It used to stay hot during change so you could cover the print and hand prime the nozzle, now you’ve just got to work fast and pray.

Before we had that command in software, we used to just manually pause with the FLUX button on the front of the machine. To make this Thaikachu (Thai Flag + Pikachu) I actually sat next to FLUX with a ruler and double-clicked the button for every layer change. Now with “Pause at Layer” you can just set multiple pauses with commas, i.e. Pause at Layer = 35, 70, 105, 140, 175

I’ve done a ton of name tags for all my kids friends backpacks and what not. It works really well for signs, name tags, badges, etc., anything where a good layer separation exists and you can set it off with a color change. Here are some of my works AMAZING WORK THERE, very impressive. I have never gotten anything near that good.

so you had to pause and unpause every layer! that’s insane! how long did it take? I will fiddle with the temperature and speed settings as you said and also the greasing, but the gears are super smooth already, im not sure if i really need it on the gears, but maybe… on other functional objects ;). thanks for the help!

oh and as I mentioned did you do the same pause and unpause with the starwars logo?

It looks like it. He did start off talking about that logo, as it was printed on it’s back, and turned 90 degrees after printing for the photo, and then talking about dual colour effect. Plus when you look at the back left you can just make out on the S that the back part is black. That would have made the transition on my capsule planter easier if I’d planned it ahead… could have just dialed in the layers in the preview, and then gone into Advanced -> Expert, and then edited the pause_at_layers variable.

Hope they put that somewhere else at some point that is more visible, or that it at least resets at the end of a print… would be annoying to do one print, forget to remove it, and then it pauses during the next one when you didn’t mean it to…

Was all of that done on the flux?

@aw1 It wasn’t pause/unpause on every layer, just the layers where you see the color change. The Star Wars logo was pretty easy, just one change and software did the pause for me. The Thaikachu was nerve-wracking for sure, because at that time there was no software feature, it was all manual with the button, and around halfway I started getting nervous. If I screwed it up then, there is no fixing it. Now with the setting in software it is both easier and harder.

I say both because it worked great as soon as FLUX Team gave us access to that command, but then somewhere around 0.7.2 they changed the code and the nozzle goes cold as soon as it pauses. That almost makes the command worthless because you have to move SO fast to change filament it is nearly impossible to do without ‘airstruding’ for half a layer.

Before they changed that, the nozzle stayed hot, so the pause would automatically stop the print and the printhead would move up. You cover the print with a sheet of paper, pull out the old filament color, feed in the new one and push it by hand until you’ve primed the nozzle with the new color. The paper protected your print. Clean up the extruded primings, remove the paper, and click ‘Resume’ and off it goes on the next layer with the new color. Now, you can’t do that anymore since the nozzle immediately goes cold. The best I’ve been able to do is have everything ready and lined up and do the filament change in about 10 seconds and it only airstruded a tiny bit.

I have no idea why they made that change, as it kind of ruined the feature. It may have been a safety issue, as if someone did not know what they were doing and set a Pause while leaving the printer unattended, it could go into Pause and sit there with a hot nozzle forever or until it burned the house down… I would think that introducing an automatic timeout so that a Pause that was not followed by a Resume within 5 minutes would cancel the print would be a more elegant solution. My two cents.

If I do anymore of these layer change prints on the FLUX I’m going to roll back to an earlier version until this gets fixed/changed. It just is not good the way it is, or else I’ll just print them on another machine.

@pfeerick It is a gcode command so it makes sense where it is with the Machine settings under Expert (way at the bottom with Cura2). But many of the other settings are mirrored in the other Settings tabs as well, so I agree, that is a good idea. In fact, it should have an entry value box on the Layers Tab, and a reset or clear button next to it. That would be a great place for it.

As far as forgetting to clear the value, I have done that far more than I care to admit here… but it really isn’t a big deal, the printer stops, you wonder why for about 2 seconds, face palm, then click resume and try to remember to clear it before the next print. Usually takes me 2 or 3 then I remember…

lol… you only wonder why if it’s right next to you… in my case it could be anything from seconds, to minutes, to hours!

Indeed, something in the layers panel would be handy… or maybe even more visible on the main screen, or perhaps even attached to the dashboard view… there is a pause button there… maybe just add a dropdown option next to it for a ‘pause at layer’ so you can enter your layers to automatically pause at. Plus something somewhere that lets you tell it to stay hot when paused, and for how long. But this is detracting from the purpose of this thread… so I’ll shut up for now!

Yes, every thing was printed on the flux since I have only one 3d printer for now

. The stormtroopers don’t need blaster rifles because they can’t aim

that does mean you had to change filament every 3-4 layers, right?

On that one, it was probably roughly about every 30 layers as I recall, but I actually did it by holding up a ruler behind the print and just ‘eyeballing’ it at set points I had calculated in advance based on the full model height and the Thai flag proportions.

They always said in school that all that math would be important someday. What they never said was that it would take this long for it to actually be true.