Something wrong with first layer!

Hi, there something wrong with the first layer of the print, it’s hard to explain but it seems like the printer head sometimes hitting the bed and sometimes going high above on the same print, pretty sure it’s not an error by the self leveler. here some pictures so you can see for yourself. Do anyone know how to solve this? 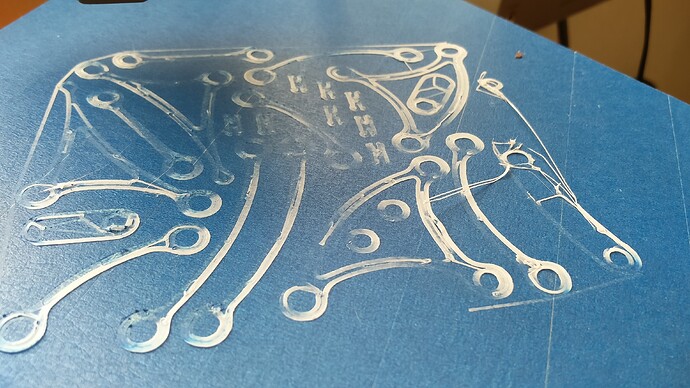 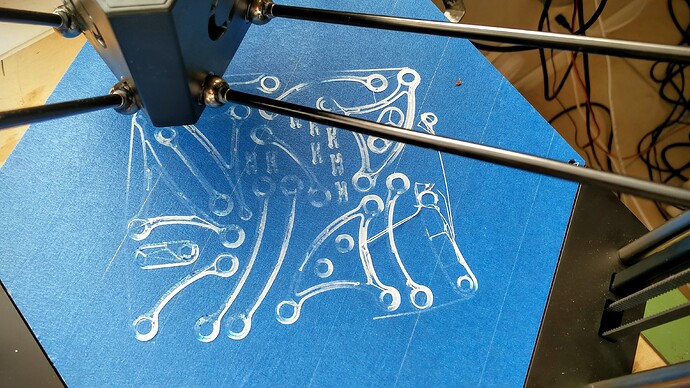 I noticed this issue also with my machine. But it seems not to be a problem, so i go on with it. I noticed that it depends in which direction the head moves if its to “low”(no material) or to high ( much material).

I am starting to get a “variant” of what you got and only really noticed it last night when observing the flux operating and wondering if you noticed something different about the way the machine functions, especially the alignment of the “Tie Rod Guide Blocks (TRGB)” when operating.

I noticed that one of the TRGB is twisting ever so lightly when the Flux is printing. This would theoretically induce a slight and respective twist on the extrusion tool head and therefore also affect the perceived “operating leveling” of the unit in progress, also explaining your observation about the directional effects results. As the Flux had already started the print and the effect is a lot less then yours (almost negligible at the moment), I let it continue and went to bed as it was getting very let and just wanted to print that print and be done with it. I will look into it a little closer in the next few days by taking the cover off to see where the “axial play” is being generated… Hopefully something simple.

I also noticed that my rod link ball end are already showing signs of wear, even though the unit has only seen 50hrs or so of print and would not have anticipated such wear. In this process, I have observed two things:

Anyway, let me know if you notice anything about the TRGB movement, i.e. should only translate vertical movement and not include some horizontal translation (rotating effect). I will try to include some photos of the Tie Rods Ball Links and a video of the TRGB issue. 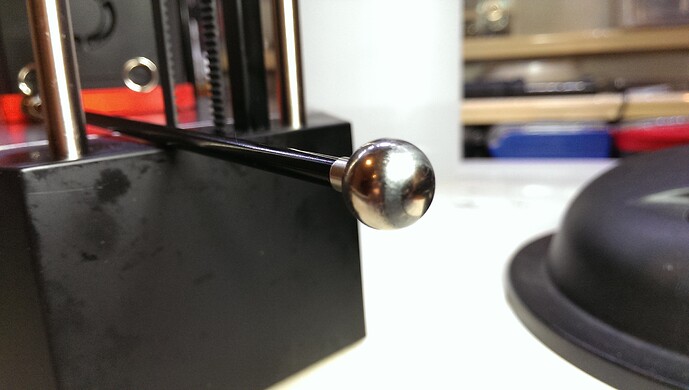 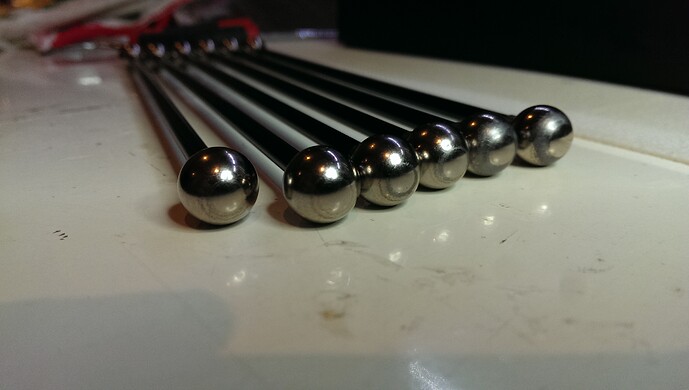 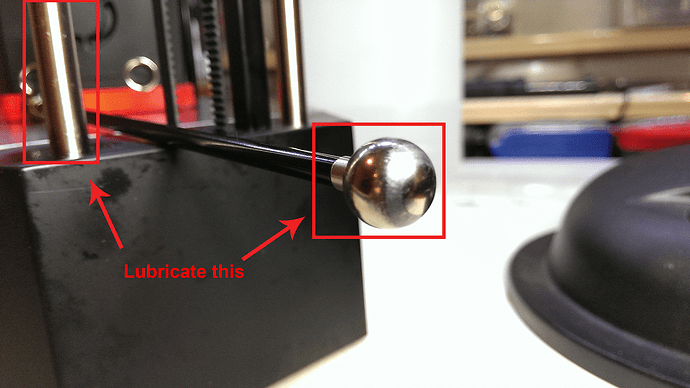 You are correct, @ALa068 , I have checked and the TRGB is twisting, especially one of them.

@Darkmax my vertical rods and rod balls are lubricated, but just in case, I removed the old and reaplyd new lubrication (took extra this time), but it did not solve the problem

does anyone know, is there a place you can buy replacement rods in case something like this happens out of warranty?

Hi Guys, Yes I also completely remove and clean everything every 10hrs or so, so lubrication and good maintenance is not the issue… I am a Mechanical Engineer and very much value maintenance and equipment in good working order.

@Scott, thanks for verifying my suspicion the rotational translation of the head caused by the tolerance issue in the TRGB unit. I was out last night and did not get a chance to look into it but will try tonight.

@darkflux, Yes I sent a query to Simon yesterday asking about the same thing and warranty on the item as well as cost of additional kits. Ideally the design really needs to be modified as I previously and briefly explained on my first post. This should not be a major issue or cost to Flux as I am proposing they use the same materials and just add and additional machining phase to the manufacturing process of the magnetic blocks/receptacles. If the block is given just a small seating radii face of say 1mm, I believe that would be enough to solve this issue and any other detaching problems etc. reported by other owners.

I’ll keep you guys posted with my finding as I progress through the TRGB unit.

Ok, I took the cover off to check how the slide bearings were secured and also see their tolerance fit. See attached photos. Without trying to bore you or getting too much into ANSI B4-2 in relation to anticipated Tolerance Fit Design, I would have expected this system to be proceeded on a ‘Close Running toleranceFit’ Class of say H8/f7" at a worst case scenario and preferably be based of H7/g6 for a good 'Sliding Fit" tolerance. Unfortunately this does not appear to be the case and believe that it sits on the Upper Limits of the ‘Loose Running Fit’ side… Note that we have jumped the ‘Free Running Fit’ Class which is between ‘Close Running’ and ‘Sliding Tolerance Fit’.
What does this all mean you may ask. Unfortunately it is not good news for this type of design as the triangulation of the design actual amplified the error as rotational transition which would not be as evident on a normal XYZ axis system.
On the 3rd photo, you can see the gap which could be around 200 micron or more. I did not measure it because I did not want to disable the unit and have not ask Flux their permission in order not to void the warranty.
The good news is that you just have to replace the slide bearings with the correct tolerance type, or press out the inner sleeve and get new once machined and press them into the former housing etc…

In the Video I took but just do not know how to post it in this forum, you can actually hear the slack when moving the bearings around… Not really what you want on a 3D printer, I am affraid, so Flux needs to take a serious look at this issue and propose a solution. First step being to have a look at the Design tolerance and then check the Manufacturing Quality Control, if the design was based on a Sliding or Close Running Fits etc…

Almost forgot to mention, their is an easy and dirty way to full the system but not really something I would recommend as an engineering as it should only be used for short term solution only. If you eccentrically re position the bearing by say introducing some material (like a bit of tape should be sufficient) between the bearing and the sliding block house where the bearing is located (only required at one extremity only), this will cause the bearing to only touch on one quadrant at opposite side and end type configuration and basically “stabilize” the error or lets call it Head tilt. It is getting a little late hear to provide sketch to explain what I am trying to explain and hope that you get the concept. 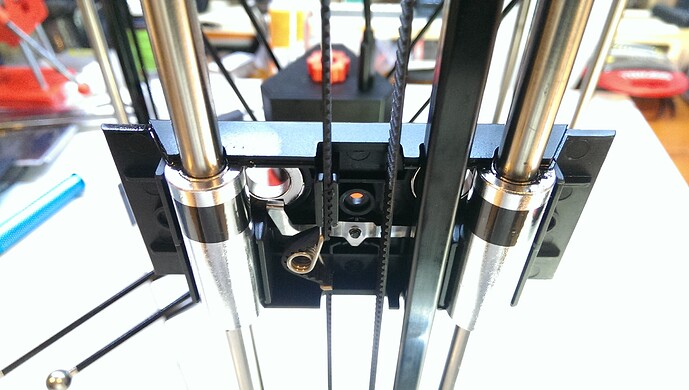 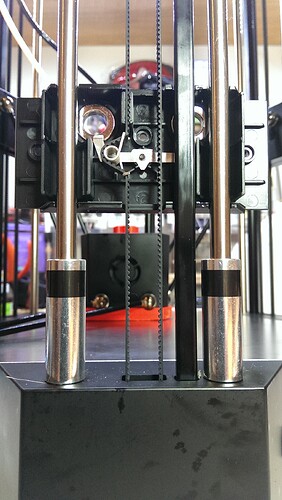 I’ve noticed this tilt on my machine. I was wondering if that could be a cause of the slight deflection in tool path when printing a long straight line. This twisting and tilt is especially noticeable when it’s doing quick small movements such as filling in a narrow section of a solid layer. I’ll try to capture a video of the twisting.

I must say I am also seeing a bad first layer just like the photos posted by @Scott. The filament is laid down thin in some places and thick/normal in others. The layer appears to be thin only when the print head is moving in certain directions and not necessarily over the same points on the build plate, just like the photos posted by @Scott. So it doesn’t appear to be a bed leveling problem, and I don’t believe my build plate is warped. Since it doesn’t affect the print beyond the first couple/few layers, I don’t believe it is a filament binding issue. The vertical tower rods and the ball ends of the connecting rods are lubricated. I am using FLUX filament. I have tried printing temps from 220 all the way down to 190. I have tried adding a z-offset, but I can only go so far with it…once the z-offset is high enough for thin parts of the layer look more normal. the thick parts will no longer stick to the bed because the nozzle is too high.

In addition to the twisting/rocking of the TRGBs, I am also hearing two audio anomalies. I hear a clicking sound at the top of the rear tower, with a slight twist of the belt when I hear the click, during downward motion of that rear TRGB. And I hear something like a whine or rub at the top of the left tower (I’m pretty sure it’s not related to the extruder motor or filament) during upward motion of that left TRGB. I’m not sure if either of these have anything to do with first layer problem.

Later today I’ll try to get a video of the twisting/rocking TRGBs and try to capture the audio anomalies and get them posted. I’ll also get photos of the model part that I’m trying to print that shows the poorly shaped circles, and a comparison photo of the same part that printed alright on a Cobblebot Little Monster 3D printer.

My initial questions are: Did anybody with this specific first layer problem open a support ticket and get a solution? Would someone on the FLUX team care to make some sort of statement or recommendation regarding this issue?

Please check if your Laser is not pressing against the build plate, you should at least get a sheet of paper between.

That’s a good thought. I checked the laser towers visually and with a piece of paper. My laser towers have good clearance and aren’t touching the bottom of the build plate.

This is a wild thought and I am not a mechanical engineer but did you make a systematic rotation of the connecting rods and checked to see if the 1st layer deposition irregularities will rotate with the rod rotation. I don’t know what are the tolerances but maybe your rods are not the same length, although I don’t know how that would affect just the 1st layer but maybe after a few layers up, the print error is there but not noticeable.

I did take the connecting rods off to re-lube them and rotated them when I did that. The thin spots on the first layer didn’t shift. I’ll try another rotation just to be sure.

Hello - Did you check to ensure that the metal plate is perfectly flat? I would take the plate and bring to a table place it down and push on all edges, if it is slightly bent that can cause the irregular 1st layer.

I would think if the plate was warped, rotating it would also change the 1st layer irregular pattern. If rotation does not affect the pattern, could it be caused by a loose base on one of the axis (where the magnets are placed to the vertical axis)?

Would you think to try a glass plate instead?

I only use the glass plate now… No problems…

I’ll recheck the metal plate, but I’m pretty sure it’s not warped. I’ll also try a print after rotating the plate to see if the first layer pattern changes. At this point, I think I would only consider getting a glass plate if I can fairly conclusively confirm that the metal plate is indeed the cause of my first layer problems, but I suspect the problem is something else.

I did get some photos and video/audio clips. I didn’t get everything I wanted so I’ll try to get what I need sometime this week and then I’ll post what I have.

Hi Scott, did you resolve this issue, because I’m starting to notice something similar to this on my first layer, looks like when the header is some direction the plastic doesn’t flow like when is in other part of the build plate.