One of the reasons I got the laser was to make stencils, is this an unreasonable expectation.

Have run a few tests now. I got over the “tilt” issue with the foil trick. Longest test I have run so far was on part of the cardboard the laser head was shipping in. Not all that deep I would call it more of an etching than anything else. 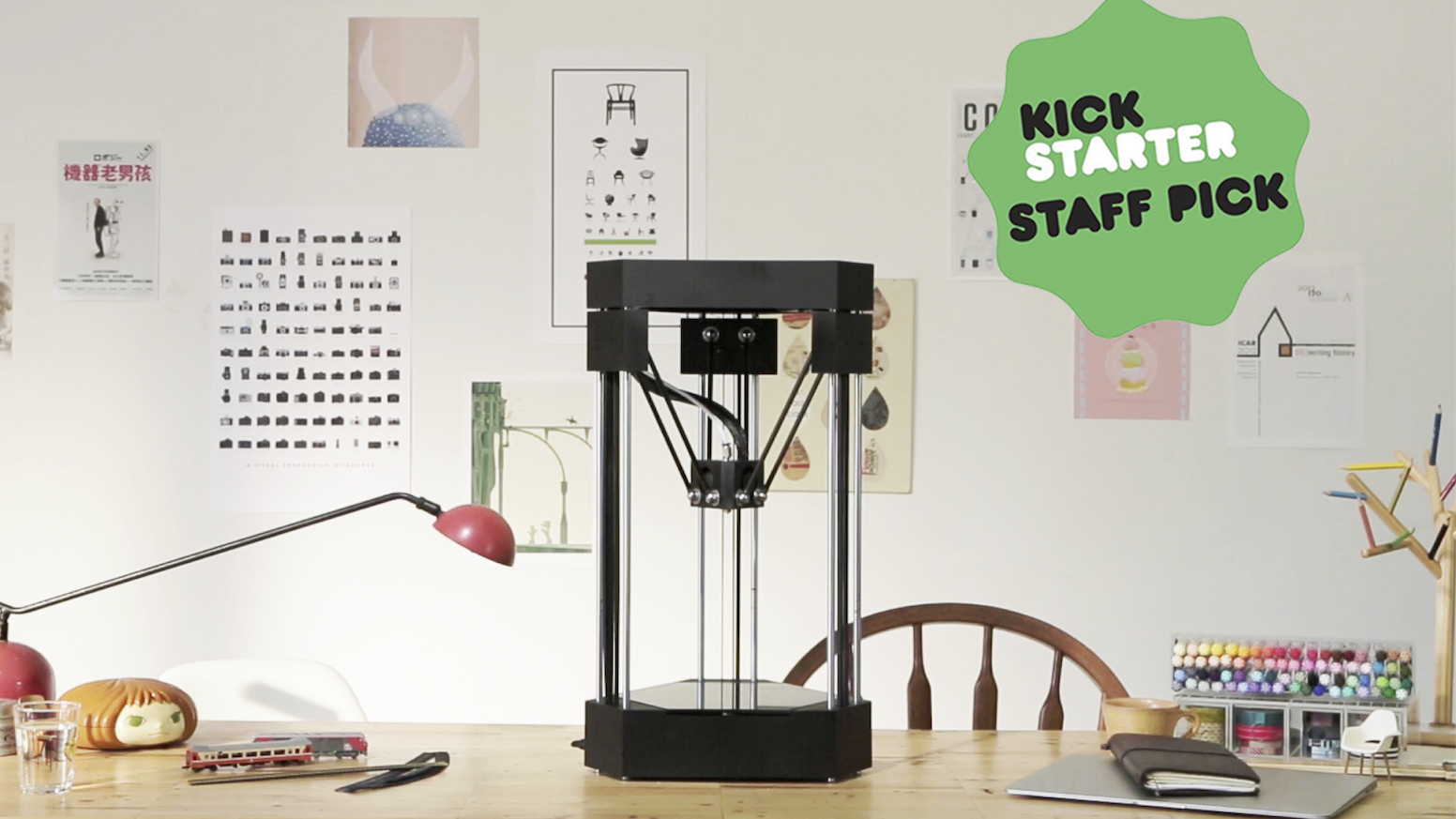 Seems that the laser was more powerful than the one that shipped? Or is it that it was moving much slower.

Should I be using only black paper/ materials to try to make “paper craft”?

Just curious, what material would you prefer to make stencils from? I was able to cut normal copy paper pretty easily with the default “paper” setting. Cardboard was as you described, more of an etch through the top layer of the cardboard. I’ve not tried much else, well besides burning a sweet picture of batman onto some toast, lol. It takes a lot of patience and a bit of fiddling, but I think it should be capable of making stencils from some thin materials. Good luck.

What colour paper did you use?

I am running a cork test now.

I stupidly tried a trial with white paper… That obviously does not work.

Also did a trial with some kind of light wood that also did not work.

I am only getting results with packing cardboard and darker. 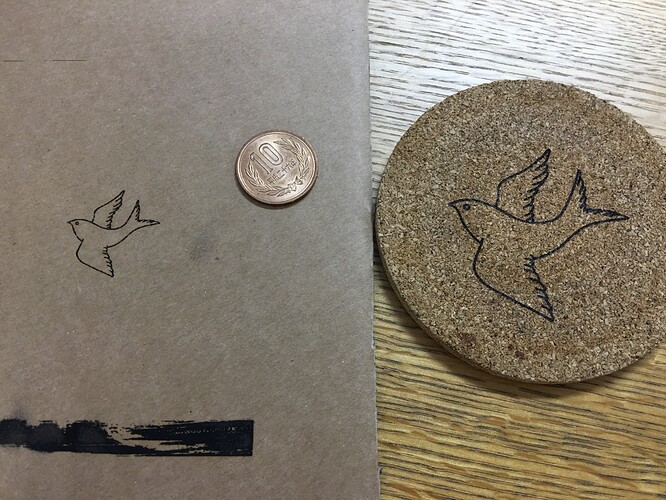 Most of the stuff I did was using the “paper” setting on cardboard, but my very first try was also using the “paper” setting on a regular white postal envelope. It burned right through the top layer. I found this out by blowing gently to clear some of the ash away and managed to blow a whole cut-out circle off the build plate! The envelope was definitely white, and it had no problem. I will say that my understanding is that you need to find the “focal point” of your particular laser module to get the best results. I’d suggest running several tests on the same exact material and try setting different heights for each attempt, then compare the results. I know there was another thread about someone doing this on some wooden discs and found that adding 3mm to the height of the object you intend to engrave worked best for him. I did not “calibrate” nearly as much, just kind of guessed and went really slow. Lol, it took me 5 and a half hours to burn Batman into a piece of bread. See in the album linked below.
Check here: http://imgur.com/a/NadPy

Maybe that is why the cardboard and cork results are better. 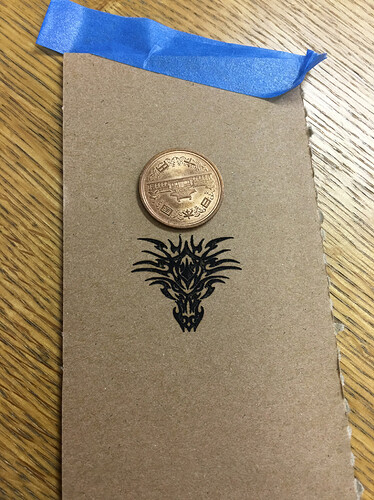 The times for something larger are giving me a lot of pause. So I am going to keep working in miniature.

I stupidly tried a trial with white paper… That obviously does not work.

The problem you had with white paper may not be with the paper being white, but with the rasterizer in Flux Studio that processes your image into gcode. I tried engraving the “Mayan astronaut” image (the engraving on the tomb lid for Kin’ich Janaab Pacal) I downloaded from Wikipedia as an SVG image onto a comic book backing board (they’re a convenient size, white on both sides, one side gloss, other side matte), and it came out well, except that there were extraneous straight lines in the engraving that weren’t in the image when I viewed it in Irfanview. I converted the image to a PNG bitmap with an online tool (nice fine, sharp lines, very clean) and tried engraving the bitmap, and all I got was white – the laser head never drew anything.

I suspect that what is causing this to happen is that the resolution of the laser when engraving from a large bitmap is lower than the resolution of the image, so the rasterizer processes 2x2, 3x3, 4x4, etc. blocks of pixels from the original down to single pixels for the laser to burn (going from black-and-white to greyscale in the process), and the pixels in the shrunk image fall below the threshold for the Flux to draw that pixel as black.

So if you had a threshold of 50, and your image consisted of one-pixel-wide vertical lines spaced five pixels apart, and the rasterizer converted the image by converting 3x3 blocks of pixels into individual pixels for the laser to draw, each 9-cell block would have 6 white pixels and 3 white pixels In a vertical line, so that block would be 3/9 black, or 33%, which is below the 50 threshold, so the entire image would draw as white.

A question…you say the laser engraver “drew white”… Did the laser fire while it was going through its motions, or was it off?

A question…you say the laser engraver “drew white”… Did the laser fire while it was going through its motions, or was it off?

No; when it’s in raster mode, the laser turns on and off as it sweeps each line in the image, and it was off from the start of the “engraving” until I killed the job because it wasn’t drawing anything. When I fed Flux Studio an image with thicker lines the engraving came out properly, so it is my surmise that it’s the image scaling that’s causing dropouts by dithering pixel blocks from the image into greyscale pixels falling below the rendering threshold.

And typing this gave me an idea that I’ll have to try when I get home – take the rasterized Pacal tomb lid image, load it into FS, and specify the threshold as being very close to zero, and see how much of the image actually renders at that point.

And I see that I misled myself – the rasterized image is heavily grayscaled, and just looks like clean lines – when I did a ‘reduce to 2 colors, nearest color’ reduction, almost all the image turns white. I reloaded it and changed it to -100 brightess/100 contrast to force it into monochrome with ‘any nonwhite pixel is black’, and I’m getting engraving when I load it into my Flux.

Well, at least I hope I’m getting an engraved image; right now, all I can see is a black line at the top of the image. At 13h43m to complete, it’s never going to compete with my inkjet printer for speed. Then again, I wouldn’t be able to run a wooden box through my printer to put the image on the top.

I am glad you and a few others are working on the engraving module. The 3D printing definitely got more attention from the start so it is good we have folks in the community working on getting engraving, drawing, and scanning up to par.

It had gotten about 1/3 of the way through the image when I checked it before leaving work. I know from doing the color reduction that I lost some detail in the image from the SVG file, but I can always do the SVG conversion to a higher-resolution PNG image before doing the color reduction. Then I need to re-do the ‘Great Wave’ reduction at a lower resolution and try that again, and investigate how to adjust the settings to get shading to work better.

The comic book backing boards look to be working well as “scratch” media, being thin cardboard (0.9mm) and more sturdy than paper. I will probably be swinging by Michael’s this weekend to pick up some balsa sheet as the base for testing the ‘wood’ setting.

Seems like this thread veered off into irrelevant engraving territory, so here’s a link to a post I made to a different thread that addresses your question.

Short answer is that with the proper settings, paper cutting does work!