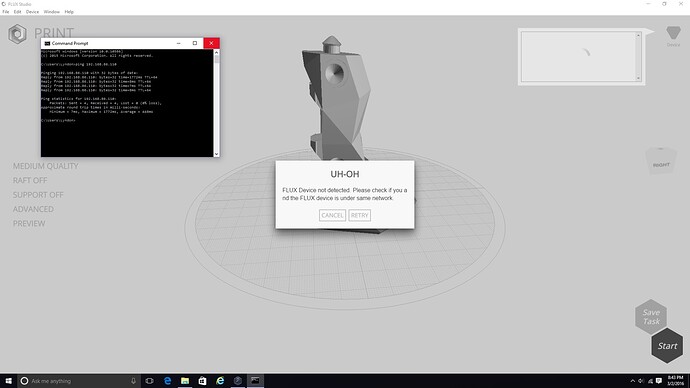 @simon
Flux Studio 0.2.11.1 can’t connect to Flux printer after PC waking up from sleep mode. I try to ping the printer and it’s OK. The issue didn’t show on previous version. Do you have any suggestion?

Quick guess it’s the firewall, is it turned on and allowed FLUX Studio to communicate?
Can you run as Administrator and see if FLUX Studio detects the printer? 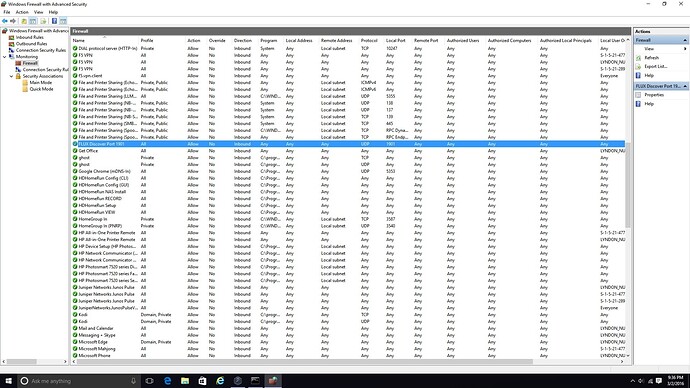 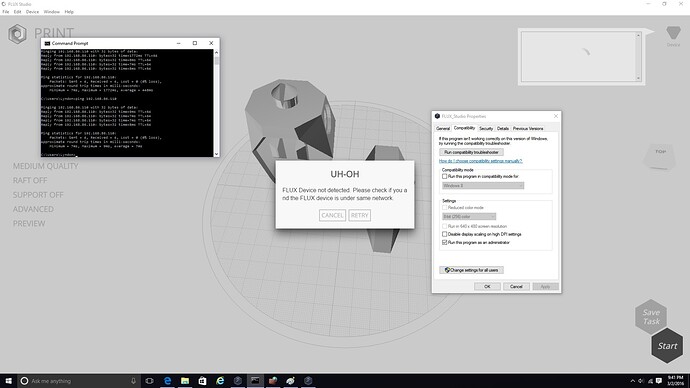 @simon
Firewall is ON and Flux executable file is always run as admin. 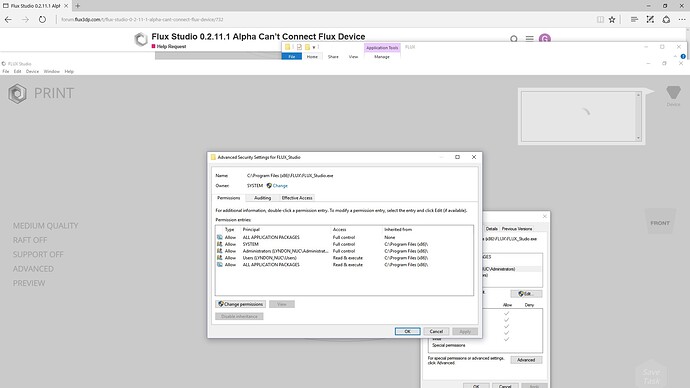 @simon
Here is the snap shot of the Flux Studio has full control.

Oh! Your computer woke up from sleeping.
Can you connect another WiFi hotspot, and connect back the WiFi hotspot you’re connecting, restart FLUX Studio and see if it detects your printer?

@simon
Yes, it detects the printer. Can you explain that?

The explanation involves some geek term, so I’ll try to keep it simple.

FLUX Delta broadcast its existence in your network. When Windows 10 joins any network, it will send “Send me broadcasts” signal to the router, so FLUX Studio were able to get the broadcast messages from FLUX Delta through the router.

But whenever Windows 10 wakes up from sleep, it forgets to send “Send me broadcasts” signal to the router, so FLUX Studio were not able to get the broadcast messages until Windows reconnects the router.

Some routers don’t implement broadcast protocols so well, so it send broadcast messages to devices regardless “Send me broadcasts” signal.

We are still figuring how to bypass most routers as well keeping only small changes in code, hopefully to solve the issue.

My PC is connected to the network via CAT5 but I do put it in sleep mode.

Are you saying if I do this I need to connect the Flux to a different Wifi hotspot, and then connect back to my use Hotspot to make it work?

Not sure I understand why?

@apspurgeon
nope, just switch your windows wifi and switch it back

Sorry I still don’t understand. My Windows PC doesn’t use WiFi (it has a wired / CAT5 connection).

@apspurgeon
Oh I got it CAT5=ethernet.
For now a workaround is to disconnect from local network and then reconnect works as well,
or you could try by using command line >> ipconfig /release & ipconfig /renew

ipconfig /flushdns isn’t a bad idea either. That will clear your computer’s memory of the DHCP addresses that it’s connected to and make it lookup fresh DNS names from the server.

@simon
I notice that the problem is ONLY happened while printing. This morning, the Flux Studio is detected the printer after PC is out of sleep mode.

Currently my Mac connects to the Flux. I can load and unload filament through the Mac so the Flux and the Mac are clearly communicating. But when I try to print from the Mac, it finds no printer. I have uninstalled the software and reinstalled. I am running the latest everything. I have reassigned the wifi through USB configuration. It just won’t talk on printing but talks fine on everything else. Currently printing only by saving task to USB and printing from autoplay.fc file.

Some how in MAC OS, you just release and renew your MAC IP address, then the communication between MAC/PC is reconnected

I just finished a print, and was getting ready to do another when Flux Studio couldn’t find my Flux Delta any more. Just like in this issue. I did start the print under 0.2.11 and upgraded to 0.2.12 during the print. I have had this issue on both versions.

I did discover a workaround though - Connect to Flux Delta with the USB cable, through the Add Device change it to a wifi station (rather than connecting to your network), then go through the setup one more time and change it back to your network. I did connect to the Flux Delta’s wifi in the middle, but not sure if it made a difference. I did all of this while connected with USB.

Try the steps for now until Flux team has the solution for it
https://flux3dp.zendesk.com/hc/en-us/articles/215394548-Trouble-Shooting-FLUX-Device-not-detected

Such kind of connection errors on Routers with a system must be resolved by them only. They can check for a solution from Netgear EX6100 Setup that will guide them in a proper manner.