Beambox finally arrived this morning. It was about a month past when they last told me it would ship.

I am in Japan. I will have to pay 13,980JPY in taxes and duties for the Beambox Pro

THE instructions are hidden away inside the box. The same issue we had with the FLUX Delta… No instructions!!! Again!!!

There is a site and some tiny videos. There should be a huge paper in the box saying to watch the videos and read the site first.

I called Flux and actually talked to a person.

Apparently the firmware update issue is a known issue in Taiwan.

Yep, I need a “new board” which will be sent out today. Fingers crossed.

Seems to be the exact thing that happened with the Deltas back in June (3 years ago?)

First, thanks for your feedback and continuous support!

Sorry about the misunderstanding on the phone, the issue happened on your machine is not the firmware but the mainboard. Even if the sd image is broken, the screen should still show some text. What we meant is that we have experiences helping customers remotely. The firmware does not brick machines since we have the recovering mechanism in the system.

But still, we feel sorry about the situation and will help you to solve it as soon as possible.

In addition, we’ll enhance the unboxing tutorial if anything is unclear. There is one thing weird to me: the instructions should be seen right after you open the box, where did you find the quick guide paper?

Thanks for the reply.

Yes. The misunderstanding on the phone was pretty bad. I had the complete wrong idea?

The main board?
Died?
After being on for 10 minutes?
Just as I was trying to update the firmware?
What is the explanation for my problem?

You guys have to be way more precise with the language you use. The impression I got on the phone is that it is a known issue that the firmware update causes problems with the customers in Taiwan. Which I then posted onto kickstarter.

Better make a new update to clear the air.

Again your end users are not always going to be engineers or people who have a lot of experience with this kind of equipment.

A 10 second video is not enough especially when there are 3 or 4 things happening in the video. The video about the first laser test. There are a bunch of things happening. The distance of the workpiece to the laser head? It is controlled by that knob that raises and lowers the whole work area platform but… How would I know that? No one says anything about it in the video. Or that the acrylic (foot/peg) is the measurement for the distance to the top of the workpiece?

The knob to control the raising and lowering of the work area platform is too small. Something bigger that someone can Geta good grip on would be better. Something like they have on CNC or milling machines maybe? I find the knob really hard to use to move the platform.

The paper was inside the small flux branded box inside the Beambox (in the box that was covering the laser head etc.

I soaked my acrylic clear panel in IPA to get the paper off of it. That worked really well actually. Managed to get everything off.

A funnel for the water tank would be nice. I happed to have one in my office.

Do I have to refill the water tank often? Is it for cooling? Is distilled water needed? None of that is written anywhere. The video just has a guy with a PET bottle of water.

The way I have come to understand how to teach people about things that I know a lot about is to have someone who knows nothing about what I am doing come and try my classes. I think you need to do the same thing with your products. Get people who know nothing about the products or process to try to set them up and use them.

So it is very much like the FLUX delta. Same issues, same mistakes, same lack of transparency, same poor customer service.

But you are a good engineering company. Hire someone else to do your customer service work?

I get it. Kickstarter is not the same as normal sales. However. The way you marketed it on Kickstarter was a finished product that was in production. This does not seem to be the reality.

The fact that my unit failed 10 minutes into using it is terrible. I really have no words for that now. I was able to understand it as a firmware update that bricked the machine. The fact now that you say it is a main board issue is very sad. This looks like a quality control issue in the manufacturing process.

Plus you sent me a tracking number on Tuesday at 3pm for the new board. It has not even been picked up from your office yet and it is now 3pm Thursday. Bit of a tease that is. Better not to generate a tracking number until it is closer to shipping I think.

I remain annoyed, angry and disappointed

I have the same issues with these videos I have with all of your tech support. I AM NOT AN ENGINEER! You skip critical steps because it is something you all know too well. 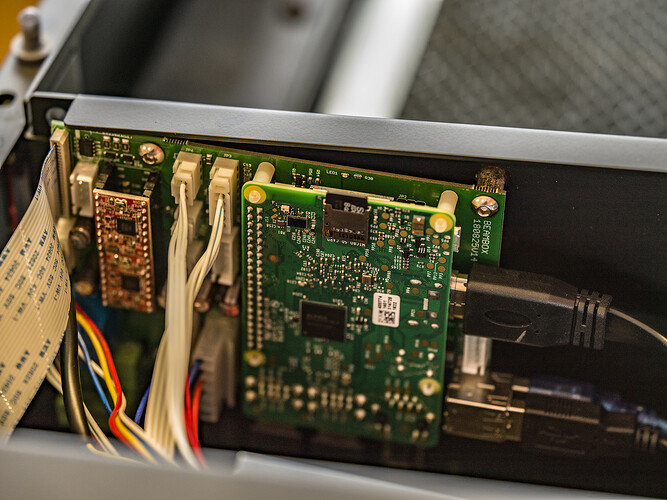 The man in the video pulled all the plugs and USB cables. Not labeling or explaining a single one. Then just puts them back in, how does he know the order? 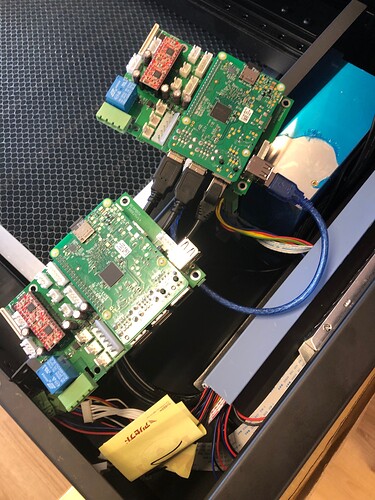 There is a bank of 3 terminals with black, red, blue wires, What is the correct order if you do not mark them.

I took video. I took photos. I still screwed it up because my touchscreen does not work.

Beambox will boot. It all turns on.

Touchscreen will not respond.

As far as I can tell the touch screen is driven by the HDMI cable and the USB cable only?

New board and connections 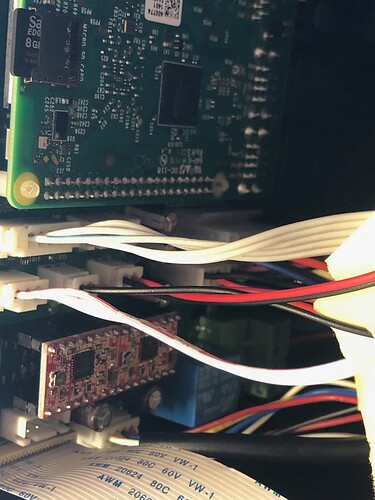 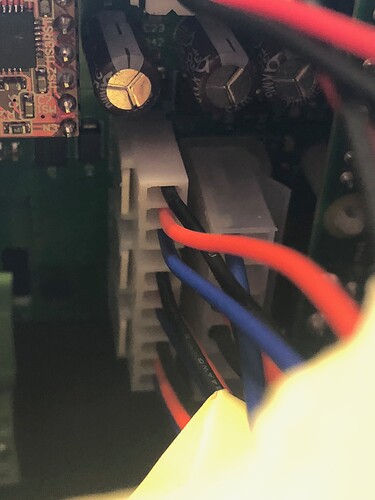 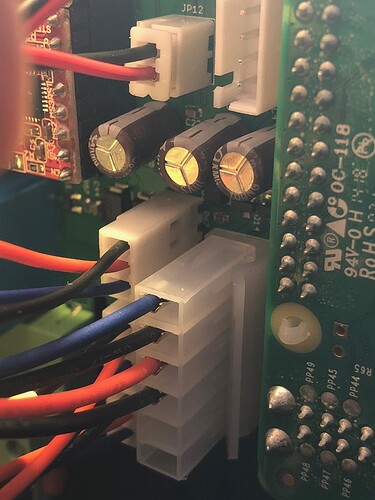 Still don’t have a working machine.

I must have loosened a connection when I was screwing the board down.

This morning I checked the USB cables and one was loose.

Machine works. Communicates with FLUX Studio. Can see the preview etc (wired connection would be better for that?)

However I have an issue with the water tank

How big is the water tank in mL?

The video has a man with a 500ml pet bottle with only a little water in it.

Why is the tank so hard to fill if it is so vital to the machine?

I am getting too many air traps, I have no idea if the tank is actually full. Should I be able to easily fill the tank?

The tank seems full. I try to use the laser for an image at 25% power, it works for a few passes then gives the "Pump offline #900”

The test paper image worked
Testing with a letter worked

Testing with an image is a failure. (45 minute print 100mmx100mm png line art that I have done with the DELTA laser head)

Maintenance check on the touch panel on the machine. Touching the pump will bring the noise for about 5 seconds. Air pump same thing. Laser and laser pulse both work under that maintenance menu. 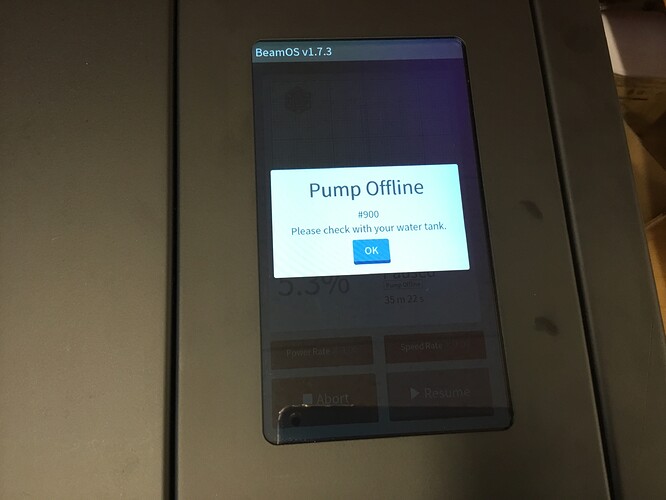 I am guessing the water tank holds somewhere around 400 - 500mL of water. I filled it multiple times today and eventually I got the air out of the system I think (hope)

Laser is running on a 45 minute “print” now. Seems fine so far.

Also the FLUX delta came with laser glasses. Why not he Beambox?

Machine is great. I wish it was put together and finished a bit better. Screws are falling off of places and getting lost in the bottom of the machine. The left side of the main cover has the pin or screw gone missing. I wish the plexiglass window was a better grade or real glass. Seems to attract the smoke residue to it like a magnet now.

Wish I could add videos here.
timelapse on my instagram
https://www.instagram.com/fotografixxllc/ 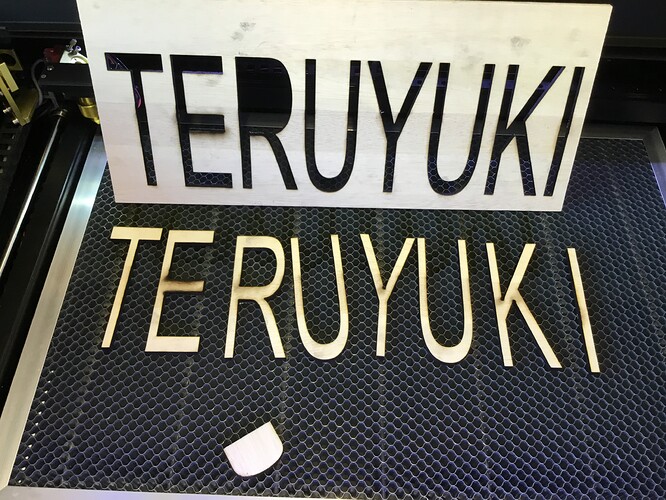 Good to know someone else is getting the machine going. I’ve got Beambox Pro (supposed to be 50W) myself but haven’t been able to cut the 3mm MDF with power 80% + 3mm/s speed. What setting did you use to cut the 6mm wood? I’m starting to think my machine has some problem since it cannot even cut the drawing paper which is way less than 1mm thickness with Power 60% + 5mm/s… ;(

Are you using the peg to adjust the laser to the correct distance to the workpiece?

The knob will move the work area up and down. the clear peg on the side of the laser head will just touch the workpiece.

Also, you can test the laser on full power with the maintenance menu and hit the laser button. Becareful though that is pretty scary.

Thank you for your reply, yes I did use the peg to adjust the height of the workspace as well as increasing the power but it still didn’t cut the 3mm MDF.

I have asked the support and they showed me a step by step method in order to check what is going on and have diagnosed that the CO2 gas seems to be leaked from the laser tube makes it too weak for cutting. They are sending me a new one as soon as they have a stock, hopefully it will fix the problem.

For people with eye problems or wear contacts, at least for me, a little more protection never hurts.

I was watching the laser work and had eye issues for a few days later.

I prefer to error on the side of caution.